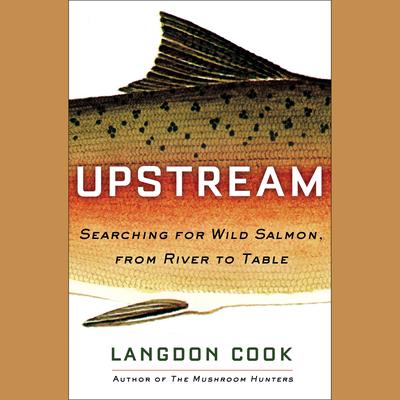 Searching for Wild Salmon, from River to Table

Finalist for the Washington State Book Award • From the award-winning author of The Mushroom Hunters comes the story of an iconic fish, perhaps the last great wild food: salmon.

For some, a salmon evokes the distant wild, thrashing in the jaws of a hungry grizzly bear on TV. For others, it’s the catch of the day on a restaurant menu, or a deep red fillet at the market. For others still, it’s the jolt of adrenaline on a successful fishing trip. Our fascination with these superlative fish is as old as humanity itself. Long a source of sustenance among native peoples, salmon is now more popular than ever. Fish hatcheries and farms serve modern appetites with a domesticated “product”—while wild runs of salmon dwindle across the globe. How has this once-abundant resource reached this point, and what can we do to safeguard wild populations for future generations?

Langdon Cook goes in search of the salmon in Upstream, his timely and in-depth look at how these beloved fish have nourished humankind through the ages and why their destiny is so closely tied to our own. Cook journeys up and down salmon country, from the glacial rivers of Alaska to the rainforests of the Pacific Northwest to California’s drought-stricken Central Valley and a wealth of places in between. Reporting from remote coastlines and busy city streets, he follows today’s commercial pipeline from fisherman’s net to corporate seafood vendor to boutique marketplace. At stake is nothing less than an ancient livelihood.

But salmon are more than food. They are game fish, wildlife spectacle, sacred totem, and inspiration—and their fate is largely in our hands. Cook introduces us to tribal fishermen handing down an age-old tradition, sport anglers seeking adventure and a renewed connection to the wild, and scientists and activists working tirelessly to restore salmon runs. In sharing their stories, Cook covers all sides of the debate: the legacy of overfishing and industrial development; the conflicts between fishermen, environmentalists, and Native Americans; the modern proliferation of fish hatcheries and farms; and the longstanding battle lines of science versus politics, wilderness versus civilization.

This firsthand account—reminiscent of the work of John McPhee and Mark Kurlansky—is filled with the keen insights and observations of the best narrative writing. Cook offers an absorbing portrait of a remarkable fish and the many obstacles it faces, while taking readers on a fast-paced fishing trip through salmon country. Upstream is an essential look at the intersection of man, food, and nature.

“Invigorating . . . Mr. Cook is a congenial and intrepid companion, happily hiking into hinterlands and snorkeling in headwaters. Along the way we learn about filleting techniques, native cooking methods and self-pollinating almond trees, and his continual curiosity ensures that the narrative unfurls gradually, like a long spey cast. . . . With a pedigree that includes Mark Kurlansky, John McPhee and Roderick Haig-Brown, Mr. Cook’s style is suitably fluent, an occasional phrase flashing like a flank in the current. . . . For all its rehearsal of the perils and vicissitudes facing Pacific salmon, Upstream remains a celebration.”—The Wall Street Journal