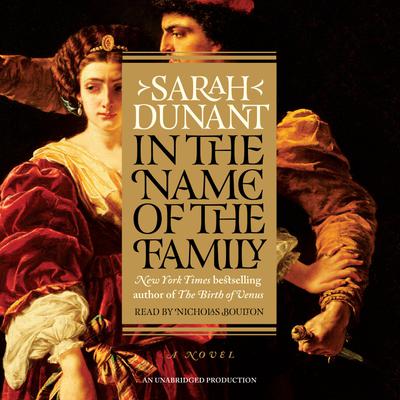 In the Name of the Family

Before the Corleones, before the Lannisters, there were the Borgias. One of history’s notorious families comes to life in a captivating novel from the author of The Birth of Venus.

“In the end, what’s a historical novelist’s obligation to the dead? Accuracy? Empathy? Justice? Or is it only to make them live again? Dunant pays these debts with a passion that makes me want to go straight out and read all her other books.”—Diana Gabaldon, The Washington Post

Bestselling novelist Sarah Dunant has long been drawn to the high drama of Renaissance Italy: power, passion, beauty, brutality, and the ties of blood. With In the Name of the Family, she offers a thrilling exploration of the House of Borgia’s final years, in the company of a young diplomat named Niccolò Machiavelli.

It is 1502 and Rodrigo Borgia, a self-confessed womanizer and master of political corruption, is now on the papal throne as Alexander VI. His daughter Lucrezia, aged twenty-two—already three times married and a pawn in her father’s plans—is discovering her own power. And then there is his son Cesare Borgia, brilliant, ruthless, and increasingly unstable; it is his relationship with Machiavelli that gives the Florentine diplomat a master class in the dark arts of power and politics. What Machiavelli learns will go on to inform his great work of modern politics, The Prince. But while the pope rails against old age and his son’s increasingly erratic behavior, it is Lucrezia who must navigate the treacherous court of Urbino, her new home, and another challenging marriage to create her own place in history.

Sarah Dunant again employs her remarkable gifts as a storyteller to bring to life the passionate men and women of the Borgia family, as well as the ever-compelling figure of Machiavelli, through whom the reader will experience one of the most fascinating—and doomed—dynasties of all time.

“Renaissance-rich details fill out the humanity of the Borgias, rendering them into the kind of relatable figures whom we would hope to discover behind the cold brilliance of The Prince.”—NPR

“[Dunant] has an enviable command of this complex political scene, with its shifting alliances and subtle betrayals. . . . [She] has a special gift for attending to her female characters.”—The New York Times