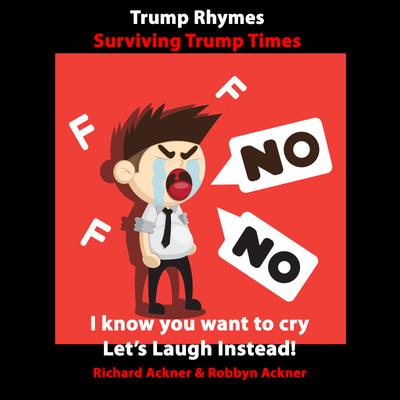 A humorous and thought provoking take on the crazy events that occurred during the 2016 election season and right up through the inauguration, centering around that whirlwind of narcissistic sociopath himself, Donald Trump.

25 Poems about Trump, his rogues gallery of supporters and opponents, as well the media chronicling it. If you feel ready to burst into tears at any moment, this book will offer a short respite of laughter before you go back to contemplating doomsday. We will answer many questions, most of which you never considered asking .

What do Trump and Dorian Gray have in common? (Hint; it's not upper class British manners)

What's worse than a week with Ted Cruz?

Which Fox News personality do the authors hate the most? (There may be no wrong answer),

Who is scared of Mike Pence? Raise your hand

Why would Morning Joe be better without Joe?

Who do you think best fits the description of a "cornpone Giuliani"?

Will the authors end up in Gitmo?

Will we receive a thank you note from Jimmy Fallon?

Alternative Facts are Just Other Words for Nothing Left to Truth

Four Surrogates of the Apocalypse Now

The Popular Vote Still Gets His Goat

Fox and Friends-Breakfast with Morons

A Week with Ted Cruz

Thumb on the Scale

The Portrait of Reverse Dorian Gray

Landslide?-Takes Big Rocks to Suggest That

Morning Joe with No Joe

We Get Our Comeup Pence

Put Out the Good China

A Nightmare From a Trump at the Helm Tweet

Repeal and Replace and Your Next Visit is Never