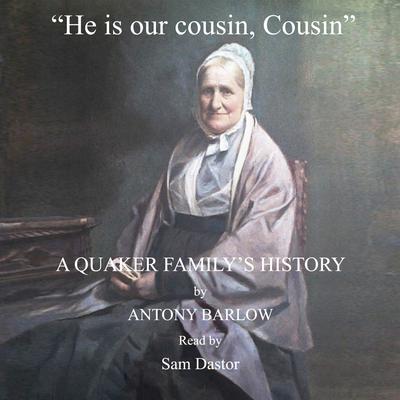 "He is our cousin, Cousin"

Antony Barlow comes from a very old Quaker family, dating back to the earliest days of Quakerism in the 17th Century, when members were still being persecuted for their beliefs. On the death of his mother, Joan Barlow in 2007 at the age of 93, he became the custodian of the invaluable collection of family archives, including fading ancient letters, crumbling historical documents, dageurreotypes and perhaps most importantly, their old family Bible dating from 1616. This wonderful old book has an amazing history all of its own, as in the days of persecution, its first owner, James Lancaster, fleeing from the law, dropped it while crossing Morecambe Bay, and the stains are still visible even today. This is one of many stories vividly recounted in this intriguing story.

The book also tells how a group of Dissenters in the 1650’s, followers of George Fox, broke away from what he saw as the corruption of the established church, and set out on their own, seeking what he called ‘the light of God in everyone’ without dogma or creed. Many were imprisoned for their beliefs, but who over the centuries have come to be respected for their honest dealings and courage in the face of oppression with famous names such as the prison reformer, Elizabeth Fry, abolitionist Samuel Bowly, philanthropist George Cadbury, educational reformer Joseph Rowntree, pacifist John Henry Barlow, diplomat and Peace prize laureate Philip Noel Baker all featuring largely in this story.

Antony tells it all, both good times and bad, including his descent from the Plantagenet Kings or how an eccentric cousin gave away all his huge fortune to Queen Victoria. There are tragic tales of infant mortality and the heart-breaking and painful early death from meningitis of his great Grandfather, Professor John Barlow, possibly one of the most gifted scientists of his generation. He describes his father’s time in the ambulance Unit, embedded with the 8th army in Egypt and Syria in the Second World War and of his near death from epidemic encephalitis whilst in Ethiopia; and of the pain of separation from his wife during the long five years of the war. He speaks honestly and movingly too of his own struggles with his sexuality and the help he received from Quakers.

As in the early days, Quakers only married within the faith, many of the Quakers of whom he writes are more often than not, his relatives or indeed the ‘Cousins’ of the title of his book He is our cousin, cousin. This book, therefore, is not only a personal family history but also very much the history of Quakers, since most of his ancestors have at one time or another been caught up in the great issues that have engaged the Society since its inception. From persecution and pacifism to temperance and anti-slavery one or other of his family have been leading champions. Along the way we also come across sailors and silk merchants, wool merchants and cheese merchants, pioneering businessmen and distinguished academicians, and all of them devout Quakers. It is a fascinating history and one which he tells vividly and with pride.