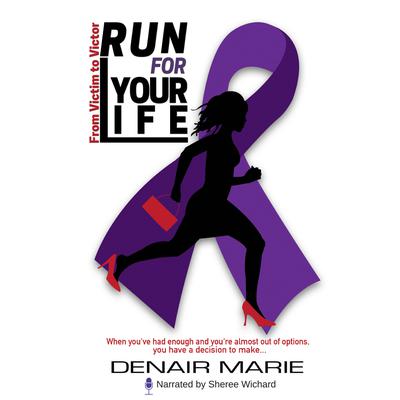 Run for Your Life: From Victim to Victor

You’ll believe in miracles after reading this one!

With his bare hands and a soul-numbing smirk, he violently twisted Denair’s neck and slowly began choking her to death! Her mind raced, “What does he mean it’s my fault? I have to die tonight?”

Run for Your Life: From Victim to Victor is an intriguing cat and mouse tale of how Denair Marie, an aspiring attorney, fled her dream job and her amazing new home. She ran for her life after her ex-boyfriend, who was charged with attempting to murder her, jumped bond and led federal Marshals on a harrowing chase. This monster was bent on silencing the only witness standing between him and a 10-year prison sentence.

Her perpetrator didn’t know that Denair had an uncanny ability to run and survive. He didn’t have a clue she overcame living in subfreezing temperatures for months at a time as a nine year old. He had no idea she’d endured growing up in the worst housing project in New York City, or that her mom miraculously survived a brutal attack where she was stabbed more than 60 times.

This riveting memoir offers living, breathing proof that anyone can break free of violent, destructive bonds, in their race from Victim to Victor.