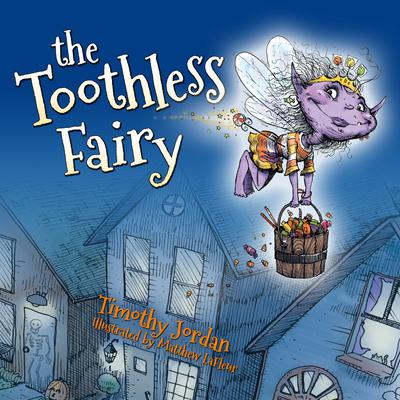 Every parent knows the problem – Halloween is over, but the issue of how to handle too much candy has just begun.

The question of what to do with an excess of sweets each November 1 provided the inspiration for the new children’s picture book “The Toothless Fairy.”

Conceived by Skeeter Buck and written by Timothy Jordan, the story allows parents and caregivers to explore with their children feelings of being different, the importance of friendship, how to share and care, and even how to create a new family tradition, all while reveling in the magic of Halloween.

“The Toothless Fairy” begins with a lonely and decidedly ugly fairy who wants desperately to have a friend. Because she is afraid her appearance will scare others and cause them to reject her, she keeps herself hidden while reveling in her favorite pastime – eating sweets.

One autumn day, to her surprise, The Toothless Fairy sees children all dressed up in scary outfits everywhere she looks. She is baffled and surprised. Why aren’t they scared of each other or of themselves? Could it be that being scary isn’t all that bad?

With that, The Toothless Fairy concocts a plan: using her fairy magic, she will approach a child and offer to trade a special gift in return for the child’s excess candy. If the child accepts her trade, she will have a friend and more candy!

Not only does The Toothless Fairy conquer her fear of approaching a potential playmate, but this special tale of courage and friendship replete with rhymes and whimsical illustrations by artist Matthew LaFleur might just solve an annual problem for parents, too.

Buck comments, “This book grew out of a tradition I started with my son when he was three years old. I wanted to honor Halloween and figure out what to do with all the excess candy!”

For her efforts in combination with those of Jordan’s, “The Toothless Fairy” has been named a 2015 INDIEFAB Book of the Year Award finalist; for more information, visit Clarion’s Foreword Review at https://www.forewordreviews.com/reviews/the-toothless-fairy/, 2016 Benjamin Franklin Awards: Best Interior Design -- Three Color, Best First Children's Book.