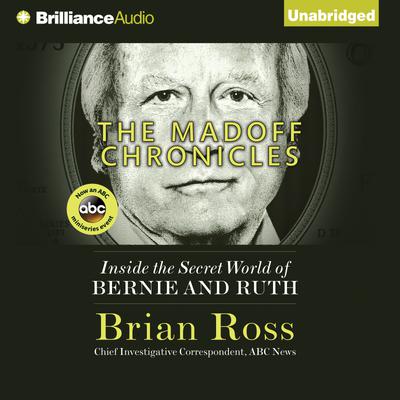 Inside the Secret World of Bernie and Ruth

The collapse of Bernie Madoff's Ponzi scheme led to the instant evaporation of $65 billion of wealth. The effects of Madoff's brazen fraud were felt most closely in New York and Palm Beach but the story was, and continues to be, front page news across the country.

Now, a paperback version of the book is perfectly timed with the ABC drama starring Richard Dreyfuss. Brian Ross and his team of investigators shed an unyielding light onto Madoff's scheme—how he got started, how he succeeded for so long, who helped him, and who shielded him from early investigations. From hard-hitting revelations to fascinating anecdotes, this is an incisive and voyeuristic look into this first family of financial crime.

This is both news and the most addictive kind of true crime reading, certain to appeal to both Madoff junkies and neophytes who will love a juicy story filled with intrigue, betrayal, and billions and billions of dollars.

Hear key details of how Madoff carried out his scam and the revelation that he began the fraud from almost the first day, in the 1960s. Hear how investigators believe that a billion dollars or more may have been hidden by Madoff. Learn what was going on inside the Madoff apartment as Bernie prepared for his life in prison and Ruth prepared for life in self-imposed confinement.

The Madoff Chronicles includes a vast array of news and material that readers won't find anywhere else:

• Extensive cooperation by Madoff's personal assistant, Eleanor Squillari.
• Extensive cooperation by Little Rick–a former employee who used to fetch drugs for the Madoffs. Little Rick knows all their dirty secrets. We learn that Bernie also liked prostitutes. He kept his favorites' names and numbers in his Little Black Book.
• Detailed chronicle of Madoff's conversations and movement inside and outside the office in the days before his arrest.
• Contains incriminating connections between Madoff and certain members of the SEC.
• Cooperation of childhood friends and neighbors has enabled Ross to write a compelling portrait of Bernie and Ruth in their early years.