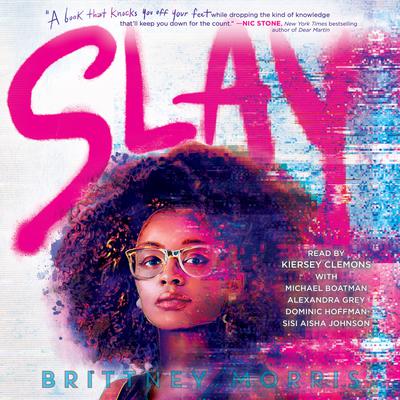 “Inspired by the movie Black Panther and the people of Wakanda, Brittney Morris went home and wrote and wrote and wrote this novel in less than a month. A debut young adult novel, Slay is about a young black teenager who code switches fluently and is the secret game developer of the multiplayer online role-playing card game, SLAY. Imminently relatable for anyone who has compartmentalized and/or hidden a part of themselves from the world for fear of being mocked or misunderstood, this book reminds us all about the dualities that live within us and how to embrace the complexities of our true selves. For ages 13+.”

A Publishers Weekly Best Book of 2019!
“Gripping and timely.” —People
“The YA debut we’re most excited for this year.” —Entertainment Weekly
“A book that knocks you off your feet while dropping the kind of knowledge that’ll keep you down for the count. Prepare to BE slain.” —Nic Stone, New York Times bestselling author of Dear Martin and Odd One Out

Ready Player One meets The Hate U Give in this dynamite debut novel that follows a fierce teen game developer as she battles a real-life troll intent on ruining the Black Panther–inspired video game she created and the safe community it represents for Black gamers.

By day, seventeen-year-old Kiera Johnson is an honors student, a math tutor, and one of the only Black kids at Jefferson Academy. But at home, she joins hundreds of thousands of Black gamers who duel worldwide as Nubian personas in the secret multiplayer online role-playing card game, SLAY. No one knows Kiera is the game developer, not her friends, her family, not even her boyfriend, Malcolm, who believes video games are partially responsible for the “downfall of the Black man.”

But when a teen in Kansas City is murdered over a dispute in the SLAY world, news of the game reaches mainstream media, and SLAY is labeled a racist, exclusionist, violent hub for thugs and criminals. Even worse, an anonymous troll infiltrates the game, threatening to sue Kiera for “anti-white discrimination.”

Driven to save the only world in which she can be herself, Kiera must preserve her secret identity and harness what it means to be unapologetically Black in a world intimidated by Blackness. But can she protect her game without losing herself in the process?