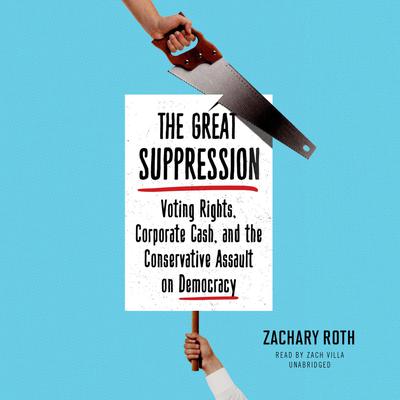 Voting Rights, Corporate Cash, and the Conservative Assault on Democracy

A deeply reported look inside the new conservative movement working to undermine American democracy.Control of the country is up for grabs-and Republicans have been rigging the game in their favor. Twenty-two states have passed restrictions on voting. Ruthless gerrymandering has given the GOP a long-term grip on Congress. Meanwhile, the Supreme Court has eviscerated campaign finance laws, boosting candidgates backed by big money.It would be worrying enough if these were just schemes for partisan advantage. But the reality is even more disturbing. As reporter Zachary Roth reveals, a growing number of Republicans distrust the very idea of democracy-and they're doing everything they can to limit it.In The Great Suppression, Roth unearths the deep historical roots of this antiegalitarian worldview, and introduces us to its modern-day proponents: the GOP officials pushing to make it harder to cast a ballot; the lawyers looking to scrap all limits on money in politics; the libertarian scholars reclaiming judicial activism to roll back the New Deal; and the corporate lobbyists working to ban local action on everything from the minimum wage to the environment. And he travels from Rust Belt cities to southern towns to show us how these efforts are hurting the most vulnerable Americans and preventing progress on pressing issues.A sharp, searing polemic in the tradition of Rachel Maddow and Matt Taibbi, The Great Suppression is an urgent wake-up call about a threat to our most cherished values, and a rousing argument for why we need democracy now more than ever.

Notice to our customers about The Great Suppression