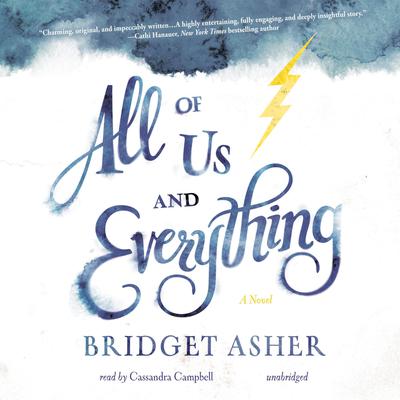 All of Us and Everything

For fans of Eleanor Brown's The Weird Sisters and Liane Moriarty's The Husband's Secret comes a smart, wry, and poignant novel about reconciliation between fathers and daughters, between spouses; the deep ties between sisters; and the kind of forgiveness that can change a person's life in unexpected and extraordinary ways.The Rockwell women are nothing if not ... well, it's complicated. When the sisters-Esme, Liv, and Ru-were young, their eccentric mother, Augusta, silenced all talk of their absent father with the wild story that he was an international spy, always away on top-secret missions. But the consequences of such an unconventional upbringing are neither small nor subtle: Esme is navigating a failing marriage while trying to keep her precocious fifteen-year-old daughter from live-tweeting every detail. Liv finds herself in between relationships and rehab, and Ru has run away from enough people and problems to earn her frequent-flier miles. So when a hurricane hits the family home on the Jersey Shore, the Rockwells reunite to assess the damage-only to discover that the storm has unearthed a long-buried box. In a candid moment, Augusta reveals a startling secret that will blow the sisters' concept of family to smithereens-and send them on an adventure to reconnect with a lost past ... and one another.

Notice to our customers about All of Us and Everything