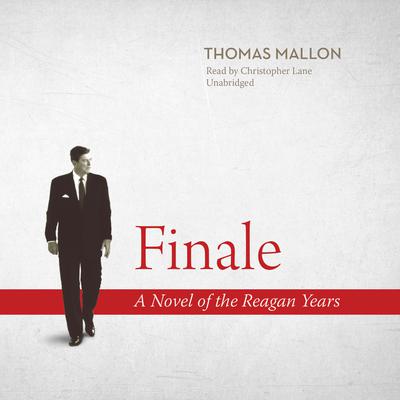 A Novel of the Reagan Years

From the author of the acclaimed novel Watergate comes a galvanizing new novel about the tumultuous administration of the most consequential and enigmatic president of modern times-Ronald Reagan.Finale takes listeners to the political gridiron of Washington in 1986, the wealthiest enclaves of Southern California, and the volcanic landscape of Iceland, where the president engages in two almost apocalyptic days of negotiation with Mikhail Gorbachev. Along with Soviet dissidents, illegal arms traders, and antinuclear activists, the novel's memorable characters include Margaret Thatcher, Jimmy Carter, Pamela Harriman, John W. Hinckley, and even Bette Davis, with whom the president long ago appeared on screen. Several figures-including a humbled, crafty Richard Nixon; the young, brilliantly acerbic Christopher Hitchens; and an anxious, astrology-dependent Nancy Reagan-become the eyes through which listeners see the last convulsions of the Cold War, the AIDS epidemic, a clash of ideologies, and a political revolution. At the center of it all-but forever out of reach-is Reagan himself, whose genial remoteness confounds his subordinates, his children, and the citizens who elected him.

Notice to our customers about Finale