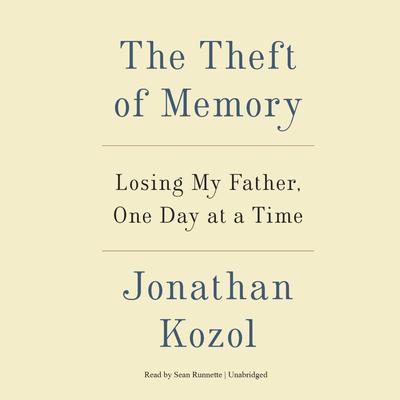 The Theft of Memory

Losing My Father, One Day at a Time

National Book Award winner Jonathan Kozol is best known for his fifty years of work among our nation's poorest and most vulnerable children. Now, in the most personal book of his career, he tells the story of his father's life and work as a nationally noted specialist in disorders of the brain and his astonishing ability, at the onset of Alzheimer's disease, to explain the causes of his sickness and then to narrate, step-by-step, his slow descent into dementia.Dr. Harry Kozol was born in Boston in 1906. Classically trained at Harvard and Johns Hopkins, he was an unusually intuitive clinician with a special gift for diagnosing interwoven elements of neurological and psychiatric illnesses in highly complicated and creative people. "One of the most intense relationships of his career," his son recalls, "was with Eugene O'Neill, who moved to Boston in the last years of his life so my father could examine him and talk with him almost every day."At a later stage in his career, he evaluated criminal defendants, including Patricia Hearst and the Boston Strangler, Albert H. DeSalvo, who described to him in detail what was going through his mind while he was killing thirteen women.But The Theft of Memory is not primarily about a doctor's public life. The heart of the book lies in the bond between a father and his son and the ways that bond intensified even as Harry's verbal skills and cogency progressively abandoned him. "Somehow," the author says, "all those hours that we spent trying to fathom something that he wanted to express, or summon up a vivid piece of seemingly lost memory that still brought a smile to his eyes, left me with a deeper sense of intimate connection with my father than I'd ever felt before."Lyrical and stirring, The Theft of Memory is at once a tender tribute to a father from his son and a richly colored portrait of a devoted doctor who lived more than a century.

Notice to our customers about The Theft of Memory