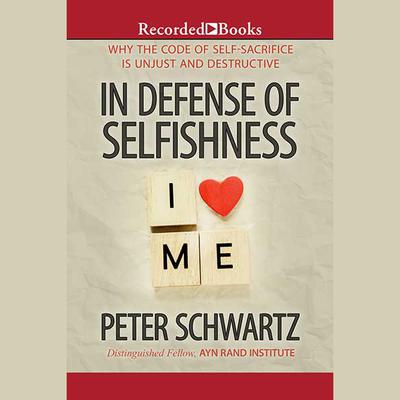 In Defense of Selfishness

Why the Code of Self-Sacrifice Is Unjust and Destructive

From childhood, we're taught one central, non-controversial idea about morality: self-sacrifice is a virtue. It is universally accepted that serving the needs of others, rather than our own, is the essence of morality. To be ethical--it is believed--is to be altruistic. Questioning this belief is regarded as tantamount to questioning the self-evident. Here, Peter Schwartz questions it. In Defense of Selfishness refutes widespread misconceptions about the meaning of selfishness and of altruism. Basing his arguments on Ayn Rand's ethics of rational self-interest, Schwartz demonstrates that genuine selfishness is not exemplified by the brutal plundering of an Attila the Hun or the conniving duplicity of a Bernard Madoff. To the contrary, such people are acting against their actual, long-range interests. The truly selfish individual is committed to moral principles and lives an honest, productive, self-respecting life. He does not feed parasitically off other people. Instead, he renounces the unearned, and deals with others--in both the material and spiritual realms--by offering value for value, to mutual benefit. The selfish individual, Schwartz maintains, lives by reason, not force. He lives by production and trade, not by theft and fraud. He disavows the mindlessness of the do-whatever-you-feel-like emotionalist, and upholds rationality as his primary virtue. He takes pride in his achievements, and does not sacrifice himself to others--nor does he sacrifice others to himself. According to the code of altruism, however, you must embrace self-sacrifice. You must subordinate yourself to others. Altruism calls, not for cooperation and benevolence, but for servitude. It demands that you surrender your interests to the needs of others, that you regard serving others as the moral justification of your existence, that you be willing to suffer so that a non-you might benefit. To this, Schwartz asks simply: Why? Why should the fact that you have achieved any success make you indebted to those who haven't? Why does the fact that someone needs your money create a moral entitlement to it, while the fact that you've earned it, doesn't? Using vivid, real-life examples, In Defense of Selfishness illustrates the iniquity of requiring one man to serve the needs of another. This provocative book challenges readers to re-examine the standard by which they decide what is morally right or wrong.