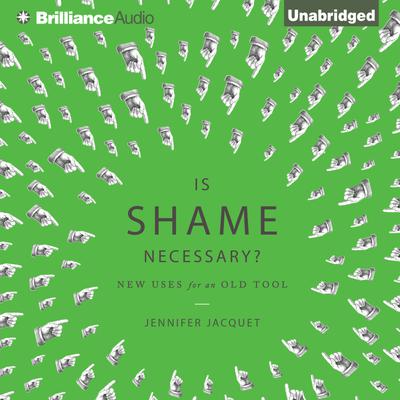 New Uses for an Old Tool

An urgent, illuminating exploration of the social nature of shame, and of the ways in which it might be used, sparingly and pointedly, to promote political change and social reform.

In cultures that champion the individual, guilt is advertised as the cornerstone of conscience. Yet while guilt holds individuals to personal standards, it proves impotent in the face of corrupt corporate policies. In recent years, we have been asked to assuage our guilt about these problems as consumers, by buying organic foods or fair trade products, for example. Yet, unless nearly everyone participates, the impact of individual consumer consciousness is microscopic. Jennifer Jacquet persuasively argues that the solution to the limitations of guilt can be found in shame, retrofitted for the age of democracy and social media. She demonstrates how shaming can function as a nonviolent form of resistance that, in turn, challenges institutions, organizations, and even governments to actuate large-scale change. She argues that when applied in the right way, the right quantity, and at the right time, shame has the capacity to keep us from failing other species in life's fabric and, ultimately, ourselves.