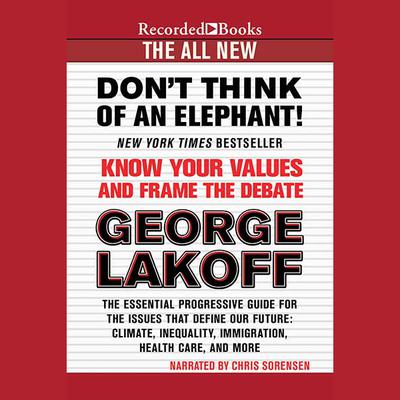 The All New Don't Think of an Elephant!

Know Your Values and Frame the Debate

Since it became an international bestseller in 2004, Don't Think of an Elephant! has been the definitive handbook for progressives who want to articulate their goals and values to voters, understand how conservatives think and why people often vote against their best interests, and frame the political debate. Completely revised and updated to tackle today's issues, the 10th Anniversary Edition not only explains what framing is and how it works but also reveals why, after a brief stint of winning the framing wars in the 2008 elections, the Democrats have gone back to losing them, and what can be done about it. In this powerful new volume, George Lakoff delves into the issues that will dominate the midterm elections in 2014, the coming presidential elections, and beyond. He examines the current progressive and conservative frames on climate change, inequality, immigration, education, abortion, marriage, healthcare, national security, energy, and more. He explores why some issues have been difficult to frame, guides readers on how to frame complex issues without losing important context, and drives home the important differences between framing and spin. Do you think facts alone can win a debate? Do you think you know what makes a Tea Party follower tick? Do you think you understand how to communicate on key issues that can improve peoples' lives? Whether you answer yes or no, the insights in Don't Think of an Elephant! will not only surprise you, but also give you the tools you need to develop frames that work, and eradicate frames that backfire.