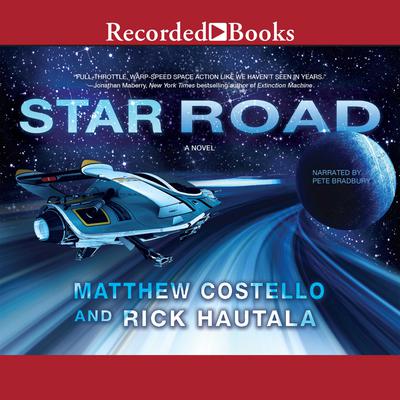 The action never falters as what starts out as a routine drive for Star Road Vehicle-66' s lively crew and passengers rapidly turns into a video game- inspired nightmare, with hairsbreadth escapes, dastardly plots, heroic rescues, gnomic utterances, monsters, love interests, guns and violence, aliens, and Raiders of the Lost Ark- style tests of nerve and analysis...All in all, something for everyone." -- Kirkus Reviews " The emphasis on the unexplored evokes the vision of classic science fiction, neatly packaging this espionage novel in a speculative wrapper." -- Publishers Weekly " Star Road is full-throttle, warp-speed space action like we haven't seen in years. A grand adventure of heroes and villains written with smarts, grit and a great sense of fun. Highly recommended!" -- Jonathan Maberry, New York Times bestselling author of Extinction Machine and Fire & Ash " Matt Costello and Rick Hautala have a hit on their hands with Star Road. From its Stagecoach-on-hyper-drive opening to its Lovecraftian climax deep in a stygian alien cave, with its non-stop action and pulse pounding horror, the universe of the ' star road' is classic science fiction, a mind boggling concept with limitless possibilities." -- Brian Yuzna, writer/director of Re-Animator and Honey I Shrunk the Kids " Matthew Costello and Rick Hautala have teamed up to create in Star Road, a near-on mythical mixture of thrills and spills in a galaxy-spanning tale of interplanetary excitement and derring-do. They' ve given us back the future we always wanted." -- Pete Crowther, award winning author of Forever Twilight " Matthew Costello and Rick Hautala take us on a thrilling ride across the Galaxy as the band of travelers aboard SRV-66 encounter monstrous alien predators, the wonderfully creepy Road Bugs, the technological perils of the Star Road itself, and most of all, deadly fellow humans. We ride the Star Road with the diminishing band as their destinies merge and their agendas diverge. Star Road is enormous fun." -- David Dvorkin, author of Children of the Undead " Star Road is filled with suspense, mystery, and action. Matt Costello and Rick Hautala compose a fascinating sci-fi thriller that is part ' Road Warrior' and part ' Star Trek.'" -- Tim Willits, Creative Director of DOOM 3 and RAGE