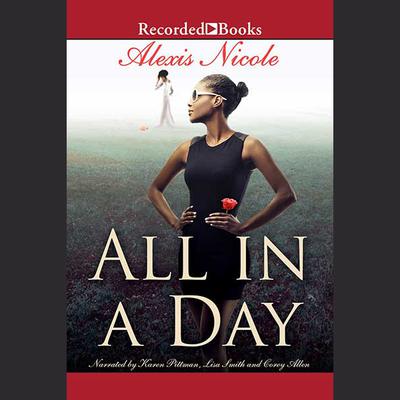 All in a Day

The wedding of Morgan Willis is the buzz around the small town, because Morgan is the prodigal child. She was their pageant queen who moved overseas without looking back. Returning to deal with everyone from her hometown is the last thing Morgan wants to do. She doesn' t need everyone in her business, and she isn' t ready to face her unfinished situation with Henry, her high school sweetheart. She' s also nervous about revealing the identity of the person she' s going to marry. All she wants to do is escape from her family and return to her life in London. The death of Joe " Junebug" Maxson is a complete shock to everyone, only made worse by the fact that it happened mere days before the family reunion. His children, Joe Jr. and Janette, refuse to be upstaged by Morgan' s wedding and insist on holding Junebug' s funeral during the same weekend. When their father' s death brings out a long-held family secret, the bonds of the Maxson family will surely be tested. This weekend promises to be a reunion the Maxson' s will never forget.