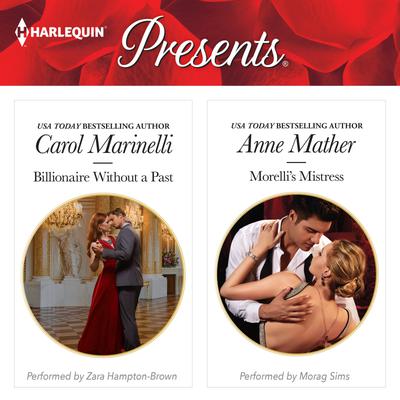 Billionaire Without a Past & Morelli's Mistress

Billionaire Without a Past

When one night isn't enough…

Nikolai Eristov lives by one rule: never look back. The inscrutable tycoon has buried his past so deep that, to the outside world, the only thing driving him is his personal chauffeur.

Until Nikolai meets elegant ballet dancer Rachel Cary at a wedding… Behind her practiced smile and innate sensuality, he glimpses a woman running from shadows as dark as his own.

One electric night together leads Nikolai to promise Rachel two weeks of exquisite pleasure. Except for the first time, this indomitable billionaire lied. Because two weeks isn't nearly enough!

Five years ago Abby Laurence would have given anything to be Luke Morelli's mistress. The taste of his lips and the burn of his touch offered a safety and sanctuary she craved more than anything. But Luke's love was off-limits, because Abby was married to another man…

Now Luke is back. He's never forgotten Abby's betrayal and he's determined she will pay for her lies. Finally free of her husband, there is only one way that she can make amends… An affair might have been illicit once, but she's Luke's for the taking now!