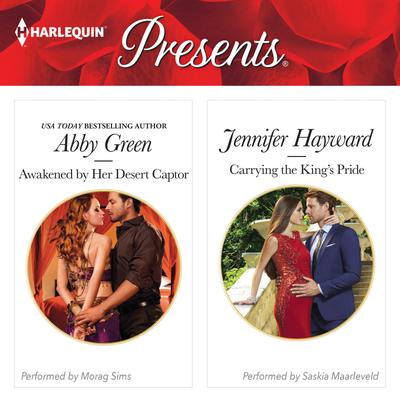 Awakened by Her Desert Captor & Carrying the King's Pride

Seduction in the sands…
Cabaret dancer Sylvie Devereux and Sheikh Arkim Al-Sahid have never seen eye to eye—not from their first antagonistic meeting to their last intoxicating kiss. And certainly not when she publicly stops his convenient society wedding to her beloved sister!
Now Arkim wants revenge on the sinful seductress who cost him the respectable reputation he needs.
Luring Sylvie to his luxurious palace in the desert, he'll get her out of his system once and for all. But with her sass and sequins stripped away, Sylvie is surprisingly vulnerable—and there's one last secret Arkim's not prepared for…her innocence!

A marriage for the monarch

One last New York night with Sofia Ramirez is all Prince Nikandros Constantinides allowed himself before returning to Akathinia, after a dreadful accident took his brother's life. But before the royal rebel is crowned, Nik discovers that he didn't leave Sofia behind alone!

In a baby's heartbeat, Nik turns Sofia's world upside down and whisks her away to his Mediterranean kingdom. Dissolving a politically perfect engagement is not what Nik—or his country—had in mind, but this proud prince will do whatever it takes to legitimize his new rule…with a wife and child!