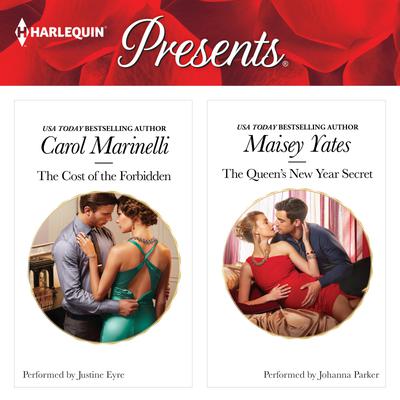 The Cost of the Forbidden & The Queen's New Year Secret

The price of endless pleasure!

Clients, women, money…ruthless CEO Sev Derzhavin is a master at getting whatever—and whomever!—he wants. Rejected as a child, Sev has never been refused since. So when his personal assistant resigns, Sev can't resist the challenge of enticing the beautiful brunette to stay…

Naomi Johnson has to walk away before she gives in to the chemistry with her infamous heartbreaker boss and opens her heart to yet more bruises. But on their last business trip to Dubai, Sev makes a shocking suggestion to relieve the tension between them: enjoy some overtime—in his bed!

Kidnapped by her king!

As the clock strikes twelve on New Year's Eve, the fairy tale is over for all of Petras when Queen Tabitha—refusing to live in a loveless marriage—asks her husband for a divorce. But anger erupts into passion, and when Tabitha flees the palace she's carrying King Kairos's heir!

Discovering her secret, Kairos kidnaps his wife. Against the backdrop of his secluded island paradise, he proves there's no escaping his royal reach. He will use the desire that's gone unsated between them for too long to ensure his wife returns to his side.