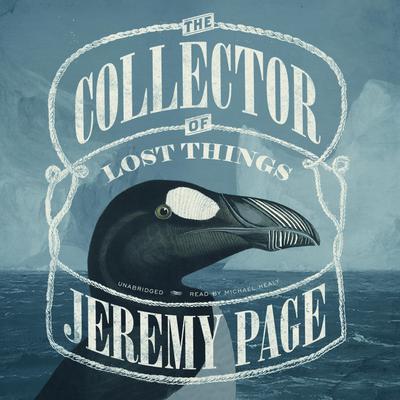 The Collector of Lost Things

An arctic adventurestory fueled by obsession, passion, and gothic influence, The Collector ofLost Things is a gripping literary suspense novel.

The worlds of ocean and ice were meeting in a frontier ofrage, as if the earth had torn in two along this line. This was a place, ifthere ever was a place, where you could disappear…

The year is 1845, and young researcher Eliot Saxby is paidto go on an expedition to the Arctic in the hope of finding the remains of theby-now-extinct Great Auk, a large flightless bird of mythical status. Eliotjoins a hunting ship, but the crew and the passengers are not what they seem.Caught in the web of relationships on board, Eliot struggles to understand themotivations of the sociopathic Captain Sykes; the silent first mate, French;the flamboyant, laudanum-addicted Bletchley; and most importantly of all,Bletchley’s beautiful but strange “cousin” Clara.

As the ship moves further and further into the wildsof the Arctic Sea, Eliot clings to what he believes in, desperate to save Clarabut irrevocably drawn back into a past that haunts him—and a present thatconfronts him with myriad dangers.

Notice to our customers about The Collector of Lost Things