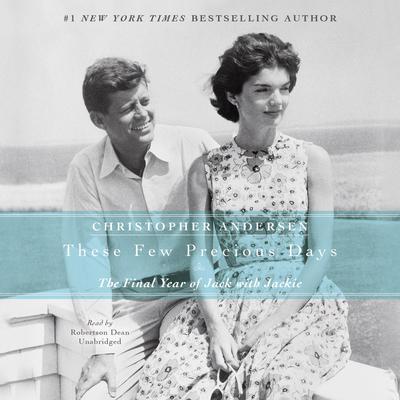 The Final Year of Jack with Jackie

They were the original power couple—outlandishly rich,impossibly attractive, and endlessly fascinating. Now, in this rare behind-the-scenes portrait of the Kenne­dys in their final year together, #1 NewYork Times bestselling biographer Christopher Andersen shows us a sideof JFK and Jackie we’ve never seen before. Tender, intimate, complex, and, attimes, explosive, theirs is a love story unlike any other—filled with secrets,scandals, and bomb­shells that could never be fully revealed … until now.

Andersenreveals stunning new details about the Kennedys’ rumored affairs—hers as wellas his—and how they ultimately overcame all odds to save their marriage; thepresident’s many premonitions of his own death and how he repeatedly tried topull out of his last fateful trip to Dallas; shocking revelations about how thecouple, unaware of the dangers, became dependent on amphetamine injections, thereal reason—according to his longtime personal physician—for JFK’s notoriouslibido; how the tragic death of their infant son Patrick led to an emotionaloutpouring from the president that surprised even their closest friends—andbrought JFK and Jackie closer than they had ever been; and touching firsthandaccounts of the family’s most private moments, before and after theassassination.

Drawing on hundreds of interviews conducted with the Kennedys’ innercircle—from family members and lifelong friends to key advisors and politicalconfidants—Andersen takes us deeper inside the world of the president and hisfirst lady than ever before. Unsparing yet sym­pathetic, bigger than life butall too real, These Few Precious Days captures the ups anddowns of a marriage, a man, and a woman, the memories of which will continue tofascinate and inspire for generations to come.

Notice to our customers about These Few Precious Days