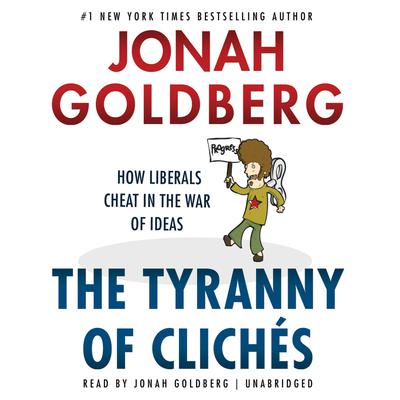 The Tyranny of Clichés

How Liberals Cheat in the War of Ideas

“We are only as free as the least free among us.” Is that really true, or is it the kind of statement most people will nod at without actually thinking about? Bestselling conservative author Jonah Goldberg calls it a liberal cliché—fundamentally wrong and potentially very dangerous.

According to Goldberg, if the greatest trick the Devil ever pulled was convincing the world he didn’t exist, the greatest trick liberals ever pulled was convincing themselves they’re not ideological. Today “objective” journalists and academics and “moderate” politicians peddle some of the most radical arguments by hiding them in homespun aphorisms. Barack Obama casts himself as a disciple of reason and sticks to one refrain above all others: he’s a pragmatist, opposed to the ideology and dogma of the right, solely concerned with “what works.” And today’s liberals follow his lead, spouting countless clichés.

Goldberg exposes the truth behind many of these clichés, including “the living constitution,” “social justice,” and even simple words like “inquisition.” With humor and passion, he dismantles these Trojan horses to show how our thinking is profoundly shaped by deeply ideological concepts and convenient myths that most of us accept uncritically—to our great detriment.

You’ll learn the real history of dangerous liberal clichés, such as:

–“Violence never solves anything.” Really? It solved our problems with the British Empire and ended slavery.

–“Diversity is strength.” Cool. The NBA should have a quota for midgets and one-legged point guards.

–“We need complete separation of church and state.” In other words, all expressions of faith should be barred from politics—except when they support liberal programs.

From Gandhi to Marie Antoinette to Madonna, Goldberg explores the context of clichés in our culture and shows how often we rely on them at the expense of serious thinking.

Notice to our customers about The Tyranny of Clichés