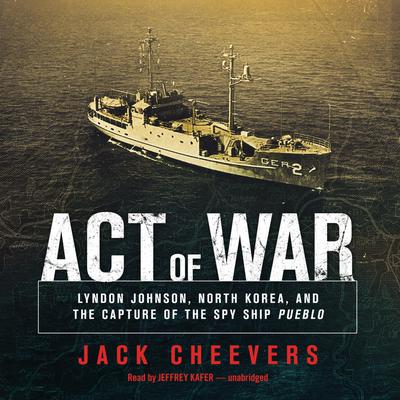 Lyndon Johnson, North Korea, and the Capture of the Spy Ship

In 1968, a small, dilapidated American spy ship set out on adangerous mission to pinpoint military radar stations along the coast of NorthKorea. Packed with advanced surveillance equipment and classifiedintelligence documents, the USS Pueblo was poorly armed and lackedbackup by air or sea. Its crew, led by a charismatic, hard-drinkingex–submarine officer named Pete Bucher, was made up mostly of untested sailorsin their teens and twenties.

On a frigid January morning while eavesdropping near theport of Wonsan, the Pueblo was challenged by a North Korean gunboat.When Bucher tried to escape, his ship was quickly surrounded by more patrolboats, shelled and machine-gunned, and forced to surrender. One American waskilled and ten wounded, and Bucher and his young crew were taken prisoner byone of the world’s most aggressive and erratic totalitarian regimes.

Less than forty-eight hours before the Pueblo’scapture, North Korean commandos had nearly succeeded in assassinating SouthKorea’s president in downtown Seoul. Together the two explosive incidentspushed Cold War tensions toward a flashpoint as both North and South Koreagirded for war—with fifty thousand American soldiers caught between them. PresidentLyndon Johnson rushed US combat ships and aircraft to reinforce South Korea,while secretly trying to negotiate a peaceful solution to the crisis.

Act of War tellsthe riveting saga of Bucher and his men as they struggled to survive mercilesstorture and horrendous living conditions in North Korean prisons. Based onextensive interviews and numerous government documents released through theFreedom of Information Act, this book also reveals new details of Johnson’shigh-risk gambit to prevent war from erupting on the Korean peninsula while hisnegotiators desperately tried to save the sailors from possible execution. Adramatic tale of human endurance set against the backdrop of an internationaldiplomatic poker game, Act of War offers lessons on the perils of covertintelligence operations as America finds itself confronting a host oftwenty-first-century enemies.

Notice to our customers about Act of War