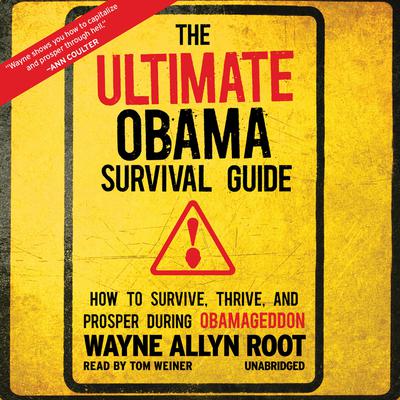 How to Survive, Thrive, and Prosper during Obamageddon

Build your wealth, protect your faith and family, secureyour freedom.

Wayne Allyn Root is no stranger to risks and challenges.From his career as a businessman and television host to his emergence as amega-pundit on virtually every major news outlet, Root has learned how to turnsetbacks into success and adversity into prosperity. And you’re going to needhis expertise as you and your family tackle the biggest challenge facingAmericans today: Barack Obama’s second term in the White House.

First, Rootdelivers the cold hard facts: how Obama is working to steal your liberty, yourhard-earned cash, and your opportunities, and where he has already got a leg upon his redistributionist, anti-personal-freedom agenda while no one waslooking. Then he takes you ona tour of the practical, real-life waysyou can fight back, not just in the ballot box but in your bank account,on your tax forms, at your church, in your home, in your schools, and at yourdoctor’s office. He’s not just talking about political activism; he’s givingyou the step-by-step instructions you need to protect yourself and your familyright now from the Obama invasion of every aspect of your life.

The Ultimate Obama Survival Guide isn’t just about survival. It’s about how to thrive despite all odds, no matterwhat Obama throws at us next.

Notice to our customers about The Ultimate Obama Survival Guide