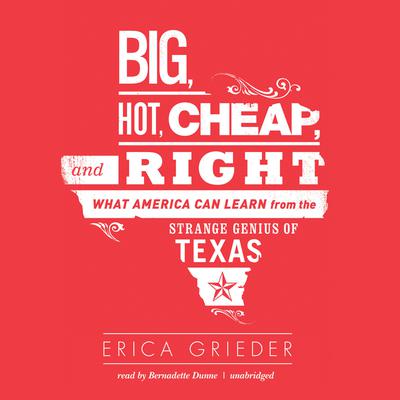 What America Can Learn from the Strange Genius of Texas

Texasmay well be America’s most controversial state. Evangelicals dominate the hallsof power, millions of its people live in poverty, and its death row is thebusiest in the country. Skeptical outsiders have found much to be offended byin the state’s politics and attitude, and yet, according to journalist, andTexan, Erica Grieder, the United States has a great deal to learn from Texas.

InBig, Hot, Cheap, and Right, Grieder traces the political history of astate that was always larger than life. From its rowdy beginnings, Texas hascombined a long-standing suspicion of government intrusion with a passion forbusiness. Looking to the present, Grieder assesses the unique mix of policies onissues like immigration, debt, taxes, regulation, and energy, which togetherhave sparked a bona fide Texas miracle of job growth. While acknowledging thatit still has plenty of twenty-first century problems to face, she finds inTexas a model of governance whose power has been drastically underestimated.Her book is a fascinating exploration of America’s underrated powerhouse.

Notice to our customers about Big, Hot, Cheap, and Right