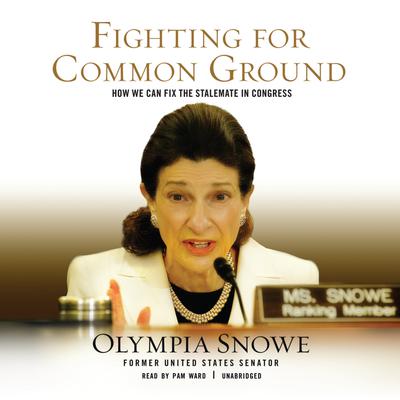 How We Can Fix the Stalemate in Congress

An outspoken centrist, Senator Snowe stunned Washingtonin February 2012 when she announced she would not seek a fourth term andoffered a sharp rebuke to the Senate, citing the dispiriting gridlock andpolarization. After serving in the legislative branch at the state and federallevels for forty years, including eighteen years in the US Senate, sheexplained that Washington wasn’t solving the big problems anymore.

In this timely call to action, she explores the roots ofher belief in principled policy-making and bipartisan compromise. A leadingmoderate with a reputation for crossing the aisle, Senator Snowe proposessolutions for bridging the partisan divide in Washington, most notably througha citizens’ movement to hold elected officials accountable.

Senator Snowe recounts how the tragedies and triumphs ofher personal story helped shape her political approach. Born in Augusta, Maine,Senator Snowe was orphaned at nine and raised by an aunt and uncle. When shewas twenty-six, her husband, a Maine state representative, was killed in a caraccident. Already dedicated to public service, she ran for and won herhusband’s seat.

Fighting for CommonGround includes anecdotes from throughout Snowe’s career and addresses herworking relationships with Presidents Reagan through Obama, Senator TedKennedy, Majority Leader Bob Dole, and many others. As a senior member of thepowerful Senate Finance Committee, the high-profile Commerce and IntelligenceCommittees, and the Small Business Committee, Senator Snowe has beendirectly involved with the most talked-about legislative challenges of recentdecades: the country’s response to 9/11, the 2008 financial crisis, theAffordable Care Act, the debt ceiling debacle, and much more.

Drawing on the lessons she’s learned as a policymaker and thefrustration she shares with the American people about the government’sdwindling productivity, Senator Snowe passionately argues that the governmenthas now lost its way, shows how this happened, and proposes ways for the world’sgreatest deliberative body to once again fulfill its mission.

Notice to our customers about Fighting for Common Ground