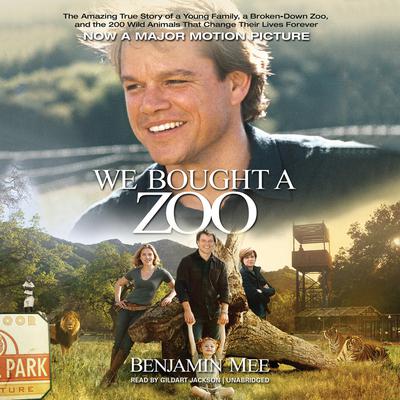 We Bought a Zoo

The Amazing True Story of a Young Family, a Broken-Down Zoo, and the 200 Wild Animals That Change Their Lives Forever

Already a BBC documentary miniseries and excerpted in the Guardian, We Bought a Zoo is a profoundly moving portrait of an unforgettable family living in the most extraordinary circumstances. This touching memoir is now a major motion picture starring Scarlett Johansson and Matt Damon.

When Benjamin Mee decided to uproot his family and move them to an unlikely new home—a dilapidated zoo in the English countryside where over two hundred exotic animals would be their new neighbors—his friends and colleagues thought he was crazy. But Mee’s dream was to refurbish the zoo and run it as a family business. So in 2006, Mee, his wife and two children, his brother, and his seventy-six-year-old mother moved into the Dartmoor Wildlife Park. Their extended family now included: Solomon, an African lion and scourge of the local golf course; Zak, the rickety alpha wolf, a broadly benevolent dictator clinging to power; Ronnie, a Brazilian tapir, easily capable of killing a man but hopelessly soppy; and Sovereign, a jaguar and would-be ninja, who devised a long-term escape plan and implemented it.

The grand reopening was scheduled for spring, but there was much work to be done and none of it easy for these novice zookeepers. Tigers broke loose, money was tight, the staff grew skeptical, and family tensions reached a boiling point.

Then tragedy struck. Katherine Mee, Benjamin’s wife, had a recurrence of a brain tumor, forcing Benjamin and his two young children to face the heartbreak of illness and the devastating loss of a wife and mother. Inspired by the memory of Katherine and the healing power of the incredible family of animals they had grown to love, Benjamin and his kids resolved to move forward. Today the zoo is a thriving success.

Notice to our customers about We Bought a Zoo