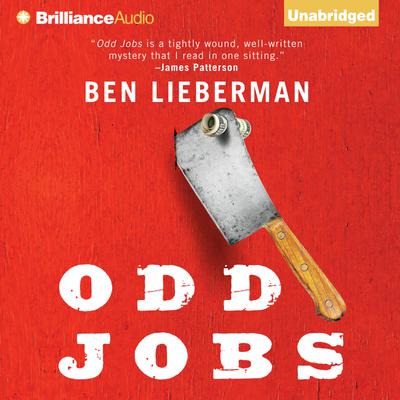 "A pure hit of uncut suspense. Ben Lieberman is one to watch.” —Harlan Coben

"Odd Jobs is a tightly-wound, well written mystery that I read in one sitting." —James Patterson

"Odd Jobs is an exciting and enjoyable read. I would love to get the main character, Kevin Davenport as a project manager on my show." —Donald J. Trump

Hauling cow carcasses through a freezing warehouse isn’t Kevin Davenport’s idea of summer fun. But it’s not his first crappy job. And with tuition due and his widowed mom strapped for cash, he’s in no position to turn down good pay.

But there’s more than meatpacking happening at Kosher World Meat Factory. And the truth isn’t quite so—well—kosher. Turns out the business is a front for a criminal syndicate. While working at the corrupt meat factory, Kevin discovers who killed his father, and now all bets are off. Kevin finally has the chance to settle the score, and he’ll tackle any job—club fighting, bookmaking, even drug dealing—to earn his revenge. But can he do it without becoming the very thing he’s trying to destroy? Or, God forbid, flunking out of school?

The Sopranos meets Animal House in this darkly comic coming-of-age novel about the price of vengeance—and the burden of truth.