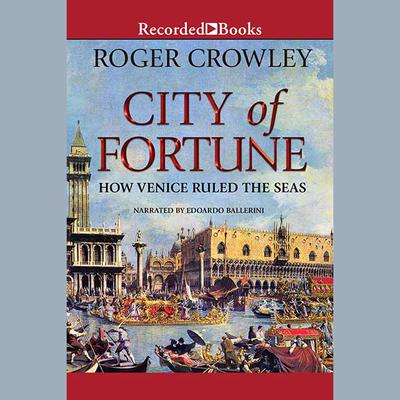 How Venice Ruled the Seas

The rise and fall of the Venetian empire stands unrivaled for drama, intrigue, and sheer opulent majesty. In City of Fortune, Roger Crowley, acclaimed historian and New York Times bestselling author of Empires of the Sea, applies his narrative skill to chronicling the astounding five-hundred-year voyage of Venice to the pinnacle of power. Tracing the full arc of the Venetian imperial saga for the first time, City of Fortune is framed around two of the great collisions of world history: the ill-fated Fourth Crusade, which culminated in the sacking of Constantinople and the carve-up of the Byzantine Empire in 1204, and the Ottoman-Venetian War of 1499–1503, which saw the Ottoman Turks supplant the Venetians as the preeminent naval power in the Mediterranean. In between were three centuries of Venetian maritime dominance—years of plunder and plague, conquest and piracy—during which a tiny city of “lagoon dwellers” grew into the richest place on earth. Drawing on firsthand accounts of pitched sea battles, skillful negotiations, and diplomatic maneuvers, Crowley paints a vivid picture of this avaricious, enterprising people and the bountiful lands that came under their dominion. Defiant of emperors, indifferent to popes, the Venetians saw themselves as reluctant freebooters, compelled to take to the open seas “because we cannot live otherwise and know not how except by trade.” From the opening of the spice routes to the clash between Christianity and Islam, Venice played a leading role in the defining conflicts of its time—the reverberations of which are still being felt today. Only an author with Roger Crowley’s deep knowledge of post-Crusade history could put these iconic events into their proper context. Epic in scope, magisterial in its understanding of the period, City of Fortune is narrative history at its most engrossing.