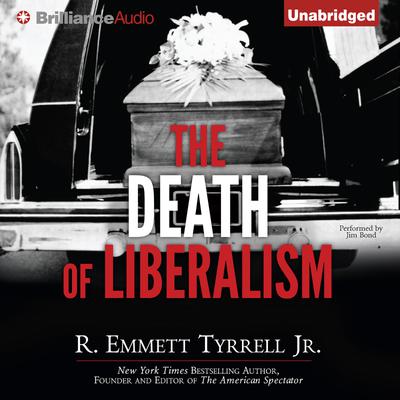 The Death of Liberalism

America’s founders risked their lives to give us a republic — and dared us to keep it. But for more than a century, an insidious force has done its worst to rip the republic asunder: a movement of elites, academes, and politicians bent on reshaping the nation in the image of Marx, Rousseau, and — somewhat comically — Mussolini.

The good news for the United States? Despite its appearance, the movement, Liberalism, is by all rights dead.

In this lively obituary, R. Emmett Tyrrell, Jr., founder and editor-in-chief of the American Spectator, chronicles:

- the differences between healthy, classical liberalism and twisted, modern Liberalism
- the noxious fumes of Kultursmog, a pollution of our culture marked by Liberal deceits, distortions, and the suppression of all disagreement
- the civil wars that gave birth to two competing Liberal camps — infantile leftists and stealth socialists — and the death throes that have engulfed them both
- how harsh economic realities and Liberal overreach have turned the tide back toward common sense and founding principles

While Liberalism is effectively kaput, it is up to an engaged citizenry to hammer home the final coffin nails. The citizenry must affirm timeless republican values and constitutional ideals — in our neighborhoods, workplaces, ballparks, and especially at the ballot box — to ensure that this destructive movement rests in as much peace as it deserves.

“No columnist, no author, has had a greater influence upon the course of American political history over the past decade than that ribald contrarian, R. Emmett Tyrrell, Jr. Even the slain giants die laughing.” - Tom Wolfe, author of I Am Charlotte Simmons and A Man in Full