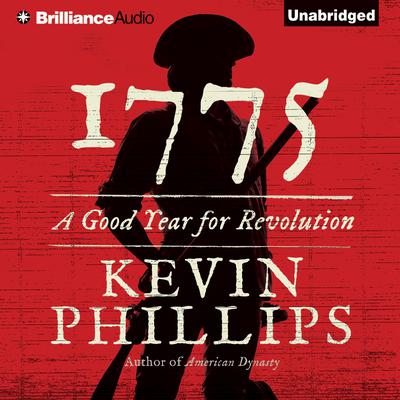 A Good Year for Revolution

What if the year we have long commemorated as America’s defining moment was in fact misleading? What if the real events that signaled the historic shift from colony to country took place earlier, and that the true story of our nation’s emergence reveals a more complicated—and divisive—birth process?

In this major new work, iconoclastic historian and political chronicler Kevin Phillips upends the conventional reading of the American Revolution by puncturing the myth that 1776 was the struggle’s watershed year. Mythology and omission have elevated 1776, but the most important year, rarely recognized, was 1775: the critical launching point of the war and Britain’s imperial outrage and counterattack and the year during which America’s commitment to revolution took bloody and irreversible shape.

Phillips focuses on the great battlefields and events of 1775—Congress’s warlike economic ultimatums to king and parliament, New England’s rage militaire, the panicked concentration of British troops in militant but untenable Boston, the stunning expulsion of royal governors up and down the seaboard, and the new provincial congresses and many hundreds of local committees that quickly reconstituted local authority in Patriot hands. These onrushing events delivered a sweeping control of territory and local government to the Patriots, one that Britain was never able to overcome. 1775 was the year in which Patriots captured British forts and fought battles from the Canadian frontier to the Carolinas, obtained the needed gunpowder in machinations that reached from the Baltic to West Africa and the Caribbean, and orchestrated the critical months of nation building in the backrooms of a secrecy-shrouded Congress. As Phillips writes, “The political realignment achieved amid revolution was unique—no other has come with simultaneous ballots and bullets.”

Surveying the political climate, economic structures, and military preparations, as well as the roles of ethnicity, religion, and class, Phillips tackles the eighteenth century with the same skill and perception he has shown in analyzing contemporary politics and economics. He mines rich material as he surveys different regions and different colonies and probes how the varying agendas and expectations at the grassroots level had a huge effect on how the country shaped itself. He details often overlooked facts about the global munitions trade; about the roles of Indians, slaves, and mercenaries; and about the ideological and religious factors that played into the revolutionary fervor.

The result is a dramatic account brimming with original insights about the country we eventually became. Kevin Phillips’s 1775 revolutionizes our understanding of America’s origins.