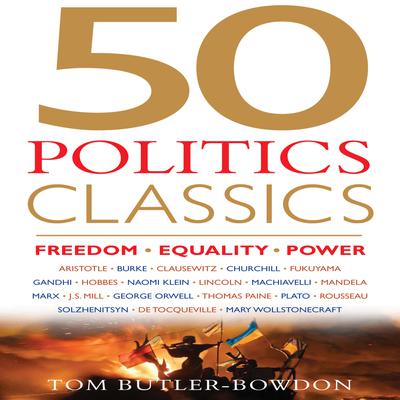 Featuring texts by Saul Alinsky, Edmund Burke, Rachel Carson, Carl von Clausewitz, Francis Fukuyama, Mahatma Gandhi, Friedrich Hayek, Thomas Hobbes, Martin Luther King, Niccolo Machiavelli, Karl Marx, J. S. Mill, George Orwell, Thomas Paine, Plato, Jean-Jacques Rousseau, Alexis De Tocqueville, Mary Wollstonecraft, and many more. 50 Politics Classics provides commentaries on the books, pamphlets, and speeches of major leaders, from Abraham Lincoln to Winston Churchill, and the texts from Aristotle to Naomi Klein, that drive real-world change. Tom Butler-Bowdon's book spans 2,500 years of thinkers and doers, economists, activists, war strategists, visionary leaders, and philosophers of freedom. Are we living in The Post-American World? Is there a Clash of Civilizations? What is The Future of Power? Whether you consider yourself to be conservative, liberal, socialist, or Marxist, in these politically charged times we could all benefit from greater understanding of these key ideas. This is the latest bestseller in Tom Butler-Bowdon's award-winning 50 Classics series, which has already sold one hundred thousand copies in the United States and four hundred thousand copies worldwide. Tom Butler-Bowdon is an expert on the "literature of possibility," covering psychology, philosophy, self-help, spirituality, and prosperity. His first book, 50 Self-Help Classics, won the Benjamin Franklin Award and was a Foreword magazine Book of the Year. A graduate of the London School of Economics and the University of Sydney, Tom lives in Oxford, United Kingdom, and Australia. Visit: butler-bowdon.com.