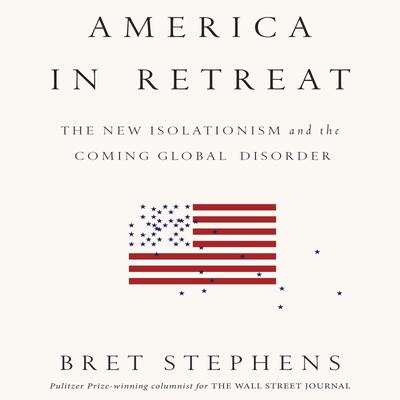 The New Isolationism and the Coming Global Disorder

“A world in which the leading liberal-democratic nation does not assume its role as world policeman will become a world in which dictatorships contend, or unite, to fill the breach. Americans seeking a return to an isolationist garden of Eden—alone and undisturbed in the world, knowing neither good nor evil—will soon find themselves living within shooting range of global pandemonium.”—From the Introduction In a brilliant book that will elevate foreign policy in the national conversation, Pulitzer Prize–winning columnist Bret Stephens makes a powerful case for American intervention abroad. In December 2011 the last American soldier left Iraq. “We’re leaving behind a sovereign, stable, and self-reliant Iraq,” boasted President Obama. He was proved devastatingly wrong less than three years later as jihadists seized the Iraqi city of Mosul. The event cast another dark shadow over the future of global order—a shadow, which, Bret Stephens argues, we ignore at our peril. America in Retreat identifies a profound crisis on the global horizon. As Americans seek to withdraw from the world to tend to domestic problems, America’s adversaries spy opportunity. Vladimir Putin’s ambitions to restore the glory of the czarist empire go effectively unchecked, as do China’s attempts to expand its maritime claims in the South China Sea, as do Iran’s efforts to develop nuclear capabilities. Civil war in Syria displaces millions throughout the Middle East while turbocharging the forces of radical Islam. Long-time allies such as Japan, Saudi Arabia, and Israel, doubting the credibility of American security guarantees, are tempted to freelance their foreign policy, irrespective of U.S. interests. Deploying his characteristic stylistic flair and intellectual prowess, Stephens argues for American reengagement abroad. He explains how military intervention in Iraq and Afghanistan was the right course of action, foolishly executed. He traces the intellectual continuity between anti-interventionist statesmen such as Henry Wallace and Robert Taft in the late 1940s and Barack Obama and Rand Paul today. And he makes an unapologetic case for Pax Americana, “a world in which English is the default language of business, diplomacy, tourism, and technology; in which markets are global, capital is mobile, and trade is increasingly free; in which values of openness and tolerance are, when not the norm, often the aspiration.” In a terrifying chapter imagining the world of 2019, Stephens shows what could lie in store if Americans continue on their current course. Yet we are not doomed to this future. Stephens makes a passionate rejoinder to those who argue that America is in decline, a process that is often beyond the reach of political cures. Instead, we are in retreat—the result of faulty, but reversible, policy choices. By embracing its historic responsibility as the world’s policeman, America can safeguard not only greater peace in the world but also greater prosperity at home. At once lively and sobering, America in Retreat offers trenchant analysis of the gravest threat to global order, from a rising star of political commentary.