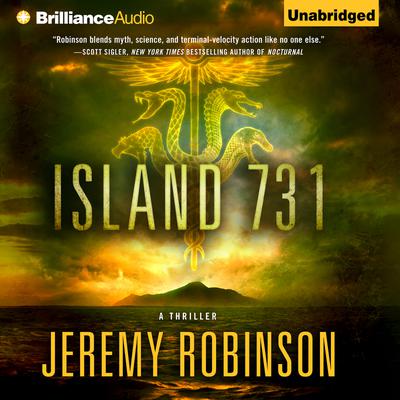 Mark Hawkins, former park ranger and expert tracker, is out of his element, working onboard the Magellan, a research vessel studying the Great Pacific Garbage Patch. But his work is interrupted when, surrounded by thirty miles of refuse, the ship and its high-tech systems are plagued by a series of strange malfunctions and the crew is battered by a raging storm.

When the storm fades and the sun rises, the beaten crew awakens to find themselves anchored in the protective cove of a tropical island…and no one knows how they got there. Even worse, the ship has been sabotaged, two crewmen are dead, and a third is missing. Hawkins spots signs of the missing man onshore and leads a small team to bring him back. But they quickly discover evidence of a brutal history left behind by the island’s former occupants: Unit 731, Japan’s ruthless World War II human experimentation program. Mass graves and military fortifications dot the island, along with a decades-old laboratory housing the remains of hideous experiments.

As more crew members start to disappear, Hawkins realizes that they are not alone. In fact, he suspects they were brought &#8202;to this strange and horrible island. The crew is taken one by one, and while Hawkins fights to save his friends, he learns the horrible truths: Island 731 was never decommissioned and the person taking his crewmates may not be a person at all—not anymore.