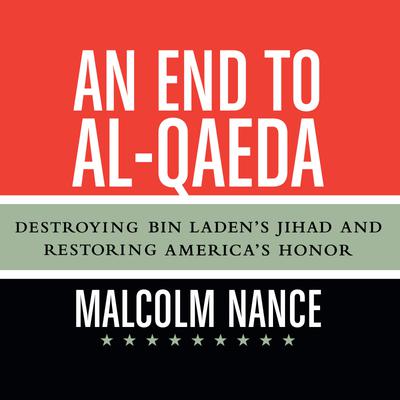 An End to Al-Qaeda

Osama Bin Laden is unquestionably the leader of the world’s most deadly terrorist cult. He has perverted the teachings of Islam to create a fringe religious ideology where only al-Qaeda speaks for God. In his cult, suicide bombing and the mass murder of Muslims prove one’s devotion.

Al-Qaeda’s 9/11 attack on the United States was just a small part of bin Laden’s strategy to win a civil war for control of Islam. By fighting his terrorists solely with bullets and bombs and ignoring his war on Islam, we have bolstered bin Laden’s recruiting efforts abroad, undermined civil liberties and economic security at home, and tarnished America’s reputation abroad.

Career intelligence officer Malcolm Nance proposes a quantum shift in how to eliminate al-Qaeda in less than twenty-four months, while restoring America’s reputation as a force for good around the world. His plan includes:
• Exposing al-Qaeda’s mission to create a nuclear-armed terror Emirate, incite a Muslim civil war, and eventually seize control of Islam
• Challenging and breaking the perceived spiritual link between mainstream Islam and al-Qaeda’s cultist ideology
• Attacking al-Qaeda fighters through precision intelligence and special-operations missions, thereby reducing the deaths of innocent civilians
• Restoring America’s shattered image in the developing world in order to support the global counter-terrorism campaign

An End to al-Qaeda is both a blueprint for destroying al-Qaeda and a fierce critique of America’s poorly executed war on bin Laden’s terrorists.