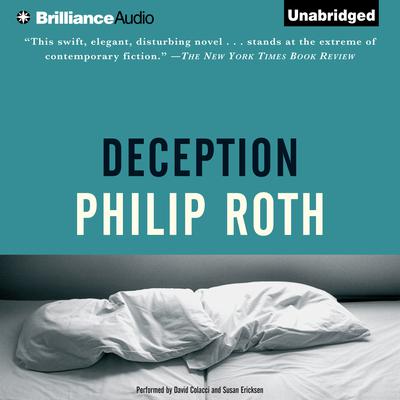 “With the lover everyday life recedes,” Roth writes — and exhibiting all his skill as a brilliant observer of human passion, he presents in Deception the tightly enclosed world of adulterous intimacy with a directness that has no equal in American fiction.

At the center of Deception are two adulterers in their hiding place. He is a middle-aged American writer named Philip, living in London, and she is an articulate, intelligent, well-educated Englishwoman compromised by a humiliating marriage to which, in her thirties, she is already nervously half-resigned. The action consists of conversation — mainly the lovers talking to each other before and after making love. That dialogue — sharp, rich, playful, inquiring, “moving,” as Hermione Lee writes, “on a scale of pain from furious bafflement to stoic gaiety” — is nearly all there is to this audiobook, and all there needs to be.

“A fiendishly clever piece of work . . . an amazing feat. . . . He’s invented the purest speech, the most convincing cadences, of any American novelist.” — William Pritchard, Hudson Review