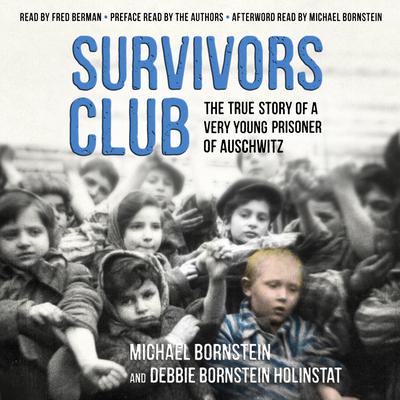 The True Story of a Very Young Prisoner of Auschwitz

"Narrator Fred Berman brings gravitas to the events of this memoir while still creating a voice for Michael [Bornstein] that sounds young and vulnerable. Berman also excels at the use of Yiddish, Polish, and German accents where needed to create a sense of the time and place." — AudioFile Magazine

This program includes a preface read by both authors with an afterword read by Michael Bornstein. A bonus conversation with the authors, archival recordings, and a pdf of photos are also included.

In 1945, in a now-famous piece of World War II archival footage, four-year-old Michael Bornstein was filmed by Soviet soldiers as he was carried out of Auschwitz in his grandmother's arms. Survivors Club tells the unforgettable story of how a father's courageous wit, a mother's fierce love, and one perfectly timed illness saved his life and how others in his family from Zarki, Poland, dodged death at the hands of the Nazis time and again with incredible deftness.

Working from his own recollections as well as extensive interviews with relatives and survivors who knew the family, Michael relates his inspirational Holocaust survival story with the help of his daughter, Debbie Bornstein Holinstat. Shocking, heartbreaking, and ultimately uplifting, this narrative nonfiction offers an indelible depiction of what happened to one Polish village in the wake of the German invasion in 1939.

This thoroughly-researched and documented book can be worked into multiple aspects of the common core curriculum.