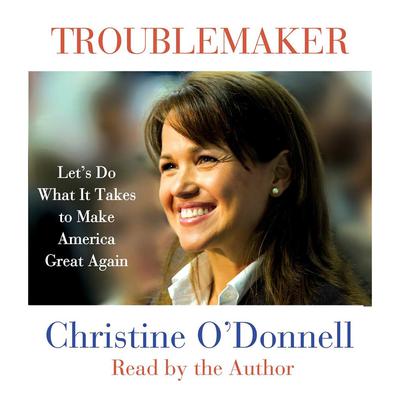 Let's Do What It Takes to Make America Great Again

The 2010 candidate for Senate—and established political "troublemaker"*--voices the quiet anger in America today: where it comes from, what it's asking for, and where it's going from here

From the moment she upset a heavily-favored incumbent in the primary for the special election to fill the Senate seat vacated by Joe Biden, Christine O'Donnell made headlines. Though she didn't win the general election, O'Donnell did win the designation of 2010's Most Covered Candidate. And what people were talking about wasn't just gossip: they responded to a fresh, unencumbered voice that appealed to voter frustration with politics—and politicians—as usual.

America's strength lies in its government "by the people, for the people", but too many of those people feel they are now just labeled featureless residents of "flyover country", told what to think and what they can and cannot do by an entrenched, reigning class of elites. O'Donnell's candidacy gave hope that the voices of real people—the people—not only can be heard but can also become a force. Part of this hope is invested in the nascent Tea Party, but most of it is invested in individual voters who are willing to work hard and make sacrifices for what they believe in, not what backroom dealing and a bloated federal government has mandated is good for them.

Troublemaker is about where O'Donnell comes from—the Philadelphia suburbs with five kids to a room—and what she weathered in the 2010 election. But the core of the book is a clear, straightforward discussion of an America that yearns to embrace freedom and opportunity through personal responsibility, and how it is hamstrung and stymied by excessive regulation, taxation, and the sanctimony of a "nanny state." And Troublemaker will deliver an important, rousing message about what we do with the quiet anger in America today: where we can go, and how strong we can be, from here. Warning readers that challenging the status quo makes the political establishment push back, O'Donnell wants to build a movement that will continue to goad it.

It's practical, too, since O'Donnell believes in power through participation: it's not enough to grumble about how things are going; pitch in and try to change things if you care. O'Donnell details how she participated by running for high office as an everywoman, but also shows how attending town council meetings, organizing a petition drive, making an effort to meet a staffer in your local representative's office, or simply reading the minutes from your community board can make a difference.