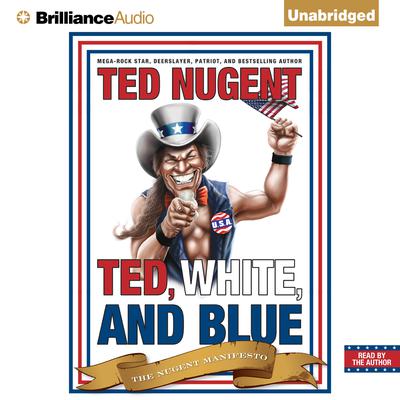 America has been craving leadership – and at last a gun-slinging, mega-rock star, deerslayer, and patriot has stepped forward to provide it. Make way for Ted Nugent. Cocked, locked, and ready to rock, the Motor City Madman, the thinking man’s Abraham Lincoln, has unleashed the ultimate high-octane political manifesto for the ages in Ted, White, and Blue – the most important patriotic statement since the Constitution. In Ted, White, and Blue you’ll discover: • Why war is the answer to so many of our current problems • Why if Ted were a Mexican, he’d start a revolution (and how, since he’s not, we can control our own borders) • How to put Uncle Sam on a diet (a waste-watchers program for government) • The Ted Plan for energy independence by 2018 – how to keep America rockin’ into the future • How to change the world for the better through the power of God, guns, and rock ‘n’ roll If you care about America, if you want to preserve, protect, and defend the land of the free and the home of the brave, if you’re fed up with lazy, whining, fear-mongering, government-gorging Al Gores, Michael Moores, and Obamaniacs, then you need to read Ted, White, and Blue: The Nugent Manifesto.