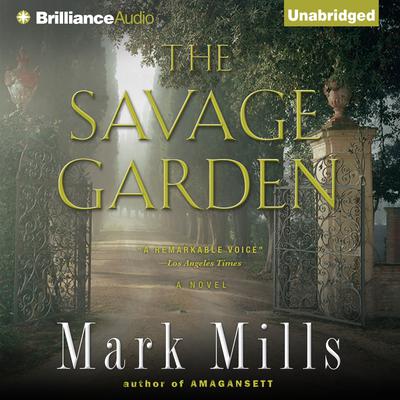 Adam Strickland, a somewhat aimless young scholar at Cambridge University, is called to his professor’s office one afternoon and assigned a special summer project: to write a scholarly monograph about the famous Docci garden in Tuscany. Dedicated to the memory of a fifteenth-century nobleman’s young wife, the garden is a mysterious world of statues, grottoes, meandering rills, and classical inscriptions. But Adam comes to suspect that something sinister lies buried in the garden’s strange iconography. What if Lord Docci’s wife was murdered, and her memorial garden is filled with pointers to both the method and the motive of the crime?

As the odd history unfolds, Adam finds himself drawn into a parallel intrigue. Through his evolving relationship with the lady of the house—the ailing, seventy-something Signora Docci—he hears stories of yet another violent death in the family, this one much more recent. The Signora’s eldest son was shot by Nazi officers on the third floor of the villa, and her husband, now dead, insisted that the area be sealed and preserved forever. Like the garden, the third-floor rooms are frozen in time.

As Adam delves into his subject, he begins to suspect that his seemingly innocent history project might be a setup. Is he really just the naive student, stumbling upon clues, or is he being used to discover the true meaning of the villa’s murderous past?