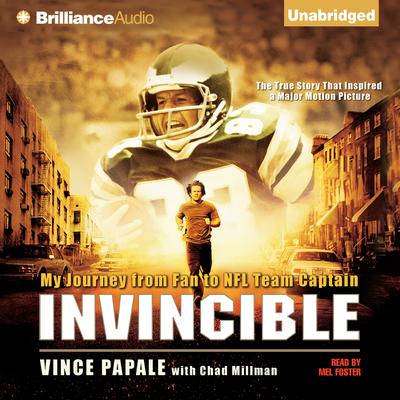 My Journey from Fan to NFL Team Captain

In 1976, Vince Papale was a down-on-his-luck substitute teacher, part-time bartender, and season ticket holder for the Philadelphia Eagles, the team he’d grown up rooting for. He had always loved football, but the closest he’d ever come to playing on Sundays was in local rough touch leagues. Until fate stepped in.

Vince was thirty years old and wondering what he would do with his life, when he heard that Coach Dick Vermeil was holding open tryouts for the Eagles. He had nothing to lose, and with the coaches eyeing him, he ran an explosive 40-yard dash in just 4.5 seconds—a world-class time—and was offered a contract on the spot. But, as much as his speed, it was Vince’s heart that impressed Vermeil.

But there was more to the story—Vince’s success was tempered by a complicated family life, a past that continued to haunt him, even as a hometown football hero.

At its core, Invincible is an underdog story that will inspire others to pursue their dreams, too.