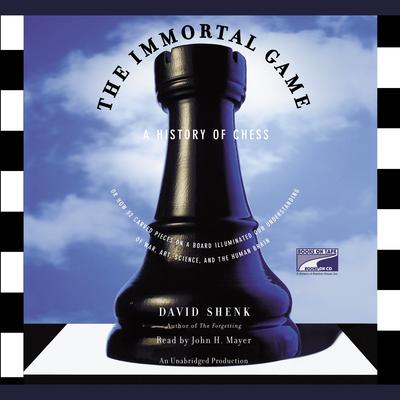 A History of Chess

A surprising, charming, and ever-fascinating history of the seemingly simple game that has had a profound effect on societies the world over.

Why has one game, alone among the thousands of games invented and played throughout human history, not only survived but thrived within every culture it has touched? What is it about its thirty-two figurative pieces, moving about its sixty-four black and white squares according to very simple rules, that has captivated people for nearly 1,500 years? Why has it driven some of its greatest players into paranoia and madness, and yet is hailed as a remarkably powerful educational tool?

Nearly everyone has played chess at some point in their lives. Its rules and pieces have served as a metaphor for society including military strategy, mathematics, artificial intelligence, literature, and the arts. It has been condemned as the devil’s game by popes, rabbis, and imams, and lauded as a guide to proper living by different popes, rabbis, and imams.

In his wide-ranging and ever fascinating examination of chess, David Shenk gleefully unearths the hidden history of a game that seems so simple yet contains infinity. From its invention somewhere in India around 500 A.D., to its enthusiastic adoption by the Persians and its spread by Islamic warriors, to its remarkable use as a moral guide in the Middle Ages and its political utility in the Enlightenment, to its crucial importance in the birth of cognitive science and its key role in the new aesthetic of modernism in 20th century art, to its 21st century importance to the development of artificial intelligence and use as a teaching tool in inner-city America, chess has been a remarkably omnipresent factor in the development of civilization.

Indeed as Shenk shows, some neuroscientists believe that playing chess may actually alter the structure of the brain, that it may for individuals be what it has been for civilization: a virus that makes us smarter.