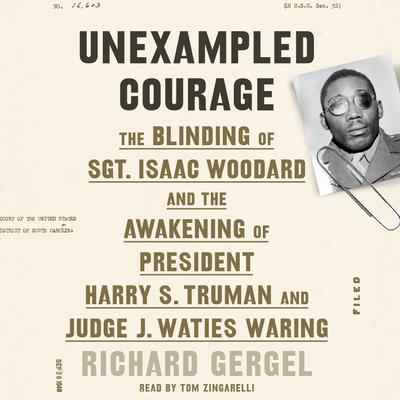 The Blinding of Sgt. Isaac Woodard and the Awakening of President Harry S. Truman and Judge J. Waties Waring

This program includes an introduction read by the author.

How the blinding of Sergeant Isaac Woodard changed the course of America’s civil rights history.

On February 12, 1946, Sergeant Isaac Woodard, a returning, decorated African American veteran, was removed from a Greyhound bus in Batesburg, South Carolina, after he challenged the bus driver’s disrespectful treatment of him. Woodard, in uniform, was arrested by the local police chief, Lynwood Shull, and beaten and blinded while in custody.

President Harry Truman was outraged by the incident. He established the first presidential commission on civil rights and his Justice Department filed criminal charges against Shull. In July 1948, following his commission’s recommendation, Truman ordered an end to segregation in the U.S. armed forces. An all-white South Carolina jury acquitted Shull, but the presiding judge, J. Waties Waring, was conscience-stricken by the failure of the court system to do justice by the soldier. Waring described the trial as his “baptism of fire,” and began issuing major civil rights decisions from his Charleston courtroom, including his 1951 dissent in Briggs v. Elliott declaring public school segregation per se unconstitutional. Three years later, the Supreme Court adopted Waring’s language and reasoning in Brown v. Board of Education.

Richard Gergel’s Unexampled Courage details the impact of the blinding of Sergeant Woodard on the racial awakening of President Truman and Judge Waring, and traces their influential roles in changing the course of America’s civil rights history.