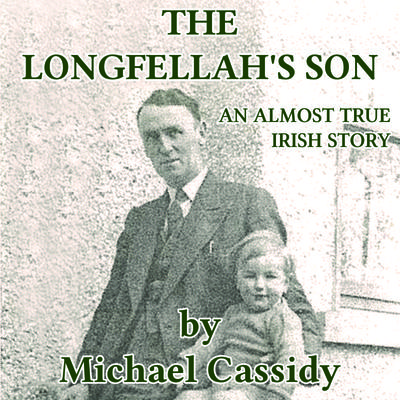 “The Longfellah’s Son by Michael Cassidy is the new Angela's Ashes, only about a better-off Irish son who blows his privileges, in a funny, fast-paced nakedly honest memoir. The writing is superb!” - Adair Lara, National best-selling author of Hold Me Close, Let Me Go and Naked, Drunk, and Writing
"He waved goodbye to her from the gate. It pained him to see her hands over her mouth standing motionless under the hall doorway, watching her child embark on an uncertain future. He was broken inside, wanting to cry because he feared what was waiting nine thousand miles away, but also guilty for the pain he was causing her. But instead of breaking, he smiled brightly, and, like a politician up for reelection, waved a hearty farewell,then quickly disappeared into the oblivion his brother's car provided. Murphy and his brother had a cup of tea at Shannon airport while waiting for his boarding call. Then they shook hands in farewell. "This will kill your mother." Were his brother's final words. Soon the silver place was shooting out over the Atlantic, distancing him with each second from his mother, from the small boy who was part of him, and from Ireland."
This is an "almost true" story. As true, anyway, as memories of an Irish son wrung from confessionals where his condemnation to burn forever in hell was confirmed, and dredged from the bottom of the bottle where his only solace seemed to elusively linger, might be. Murphy was a child of the newly emerging 1950’s Irish middle class, and was raised in the environment of a conflicted marriage that never should have happened. While his privileged upbringing seemed idyllic to the outside world, his reality was starkly different. He became a meteor raging through the lives of those who loved him and many who didn’t.
This Irish memoir of an Irish Catholic childhood begins in Limerick, Ireland, and takes us on a personal journey complete with the challenges of Catholic schooling, the confusion of adolescence within a culture that condemned even the thought of anything carnal, the allure of omnipresent alcohol, and the desperate need to escape the misery so bound up in strong family ties that escape was near impossible. Told with forgiveness and humor and compassion for the innocent child who turned rebellious and self-destructive and learned most lessons the hard way,
"Rarely have I come across a more powerful record of the debilitating effect of sustained drunkenness on the physical, mental, and moral health of a human being. In its searing portrait of the dead-eyed, relentless, self-gratification that drives addictive behavior, few such memoirs compare with the brutal impact of The Longfellah’s Son: An Almost True Irish Story by Michael Cassidy." - James W. Flannery, W.B. Yeats Scholar, Critic, Winship Professor Emeritus of the Arts and Humanities, Emory University Atlanta, GA
“Cassidy writes as only the Irish can, entwining lyrical beauty with brutal honesty. Young Murphy, born into a wealthy Limerick family, at first sees the world and its inequities through a puzzled child's innocent eyes. Then we watch as he grows into a rebellious and sometimes lost young man. For me, The Longfellah's Son is a true visit to Ireland allowing the reader to experience both this beautiful country's magic and the pain, regardless of one's social strata.” - Jil Plummer, Author of Caravan to Armageddon, Amber Dust, and Remember to Remember