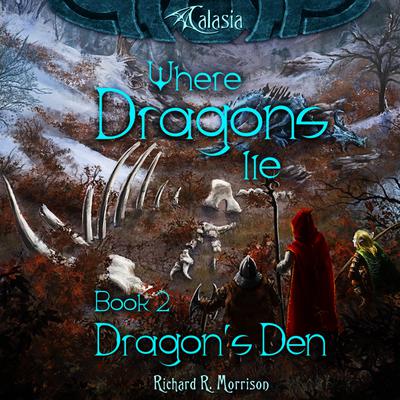 The Age of Kingdoms draws to a close as the southern races of Calasia extend their reach into the regions of Free Callibri, announcing the dawn of the Age of Fire. Follow the Chronicles of Calasia, beginning with, "Where Dragons Lie", a tale of tragedy and triumph, and the birth of a life long journey of personal definition for the Hollow Man, on his quest to uncover the elusive secrets of his nightmares, filled with the suffering of dragons, and lost memories that may lead him down a path of no return. Across the Greensward Plains of Callibri and into the crowded city of Zelia, he discovers parts of himself beyond his control, as time moves at an increasingly slower pace the closer he gets to living out his dreams of terror. All in the making of a man, and the shaping of the World of Calasia.

Ride with the Knights of Almaria, follow the elves of Rothgar and the dwarves of the Gunnerdon Mountains. Fly with dragons. Soar through the skies of Calasia, experience a world rich in history and diversity. Witness the rise of wizards and their dark counter parts jostling for control over the looming threat of an unstoppable calamity. And try to understand the malevolence of an alien entity that steers two worlds into darkness.

Calasia is the mother of elves and dwarves, of men and women, of might and magic, trolls and ogres, and all manner of creatures that walk, crawl, swim and fly. Calasia is alive, her soul the lifeblood of all things, good and evil alike.

Calasia is the mother of dragons.

Dragons have existed for so long that there is no memory of when they came to be. Dragons ruled this world for millions of years, taking from the land only what they needed to survive. They made their homes in the highest crags, and were one with the land, the sea, and the skies, natural creatures of magic. The dragons of old believed in the One, Father of the Gods, the Creator, who forged the world for them, supported on the branches of the Tree of Life, Yggdrasil. The dragons roamed free, and took what the world had to offer. They called their world, Calasia.

They were masters of day and night, the greatest hunters over all. Steeped in tradition and honor, they took one mate for life. Dragons developed laws and social order. They separated into clans, and when the walking races sprung from the earth, dragons swore an oath never to interfere with their ways.

Of the walkers, man was the most industrious, though shorter lived than most. Men lacked wisdom and foresight, and spread like ivy across the world. They killed and fought amongst themselves, always seeking more than they needed. Some grew in might and magic, dark orders, evil temptresses stealing the lifeblood from the earth, twisting it into something corrupt, tempting the fate of the gods, and mythical figures come to life.

For the longest time, dragons remained loyal to the oath.

There are many stories that weave through the tapestry of time on Calasia, however not all hold such significance as the ones you will experience here, as we come to see how Calasia is inexorably linked to Earth.