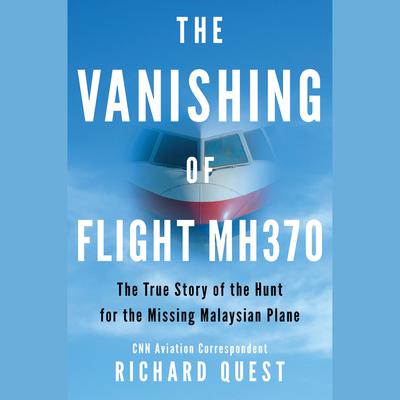 The Vanishing of Flight MH370

The True Story of the Hunt for the Missing Malaysian Plane

On March 8, 2014, Malaysian Airlines Flight MH370 disappeared with barely a trace, carrying 239 people on board—seemingly vanishing into the dark night. The airplane’s whereabouts and fate would quickly become one of the biggest aviation mysteries of our time...

Richard Quest, CNN’s Aviation Correspondent, was one of the leading journalists covering the story. In a coincidence, Quest had interviewed one of the two pilots a few weeks before the disappearance. It is here that he begins his gripping account of those tense weeks in March, presenting a fascinating chronicle of an international search effort, which despite years of searching and tens of millions of dollars spent has failed to find the plane.

Quest dissects what happened in the hours following the plane’s disappearance and chronicles the days and weeks of searching, which led to nothing but increasing despair. He takes apart the varying responses from authorities and the discrepancies in reports, the wide range of theories, the startling fact that the plane actually turned around and flew in the opposite direction, and what solutions the aviation industry must now implement to ensure it never happens again.

What emerges is a riveting chronicle of a tragedy that continues to baffle everyone from aviation experts to satellite engineers to politicians—and which to this day worries the traveling public that it could happen again.