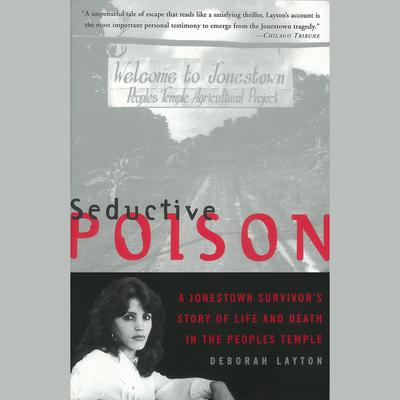 Told by a former high-level member of the Peoples Temple and Jonestown survivor, Seductive Poison is the "truly unforgettable" (Kirkus Review) story of how one woman was seduced by one of the most notorious cults in recent memory and how she found her way back to sanity.

From Waco to Heaven's Gate, the past decade has seen its share of cult tragedies. But none has been quite so dramatic or compelling as the Jonestown massacre of 1978, in which the Reverend Jim Jones and 913 of his disciples perished. Deborah Layton had been a member of the Peoples Temple for seven years when she departed for Jonestown, Guyana, the promised land nestled deep in the South American jungle. When she arrived, however, Layton saw that something was seriously wrong. Jones constantly spoke of a revolutionary mass suicide, and Layton knew only too well that he had enough control over the minds of the Jonestown residents to carry it out. But her pleas for help--and her sworn affidavit to the U.S. government--fell on skeptical ears. In this very personal account, Layton opens up the shadowy world of cults and shows how anyone can fall under their spell. Seductive Poison is both an unflinching historical document and a riveting story of intrigue, power, and murder.


PRAISE:
"A suspenseful tale of escape that reads like a satisfying thriller, Layton's account is the most important personal testimony to emerge from the Jonestown tragedy." --The Chicago Tribune

"Layton is scrupulous and honest... A terrific read... a page turner to rival the best spy thriller." --The Evening Standard UK

"Even teens unfamiliar with Jonestown will find this a powerful memoir." --Booklist

“Seductive Poison is an absolutely riveting story, told as memoir but with the pulse-pounding suspense of a murder mystery. I read Layton's account non-stop through the night, unable to let go, struck by the realization that this is not simply an account of a bygone tragedy. It has great relevance to many of the terrible events we see unfolding today, for this is a story about those who seek a better world and are then inextricably caught in a plan to end it. This is a universal tale about ideology gone awry.” --Amy Tan

“Cults are multiplying and growing in this country. Why do apparently normal people surrender in body and soul to a charismatic egomaniac? Deborah Layton knows. This haunting book, written with candor and passion reads like a thriller. I could not put it down.” --Isabel Allende