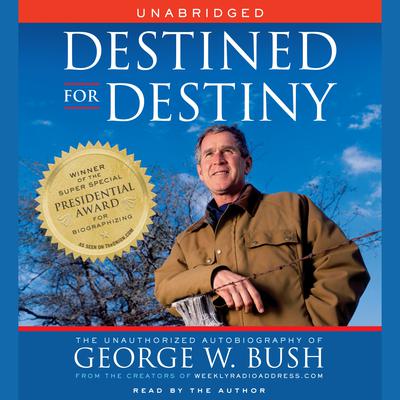 In Destined for Destiny, George W. Bush offers readers an intimate, plainspoken, and often readable look at the character-shaping achievements that led to his inevitable rise to the office of President of the United States.

Written from the heart, not from the brain, this definitive autobiography takes readers on a journey through the 43rd President's life, including his hardscrabble beginnings as the child of West Texas oil millionaires, the remarkable academic performance that earned him entry into the finest East Coast schools, and his proud service to the country as an occasional member of the National Guard sometime around 1972 or 1973.

He proudly recounts his years as a successful oil-business failure and the owner of a baseball team. He even dares to dream the ultimate dream: to become Commissioner of Baseball.

The great man we meet here displays his mother's steely resolve and vindictive temper, his father's keen mastery of language, and his own unique gift of deciding.

His gripping life story deepens when a faith in God hits him one day "like a bottle of Jack on an empty stomach," and he has an encounter with the Prince of Peace that sets George W. Bush on a path to become the greatest War President in history.

To help craft this lasting account of his life and leadership, George W. Bush turned to two writers who have earned not only his trust but his deep friendship: Scott Dikkers, editor-in-chief of The Onion and coauthor of the #1 bestseller Our Dumb Century, and Peter Hilleren, former producer for public radio and some of the nation's finest public-access cable-television stations. Dikkers and Hilleren call on their finely honed journalism expertise every week to write and record the President's weekly radio address on WeeklyRadioAddress.com. Their work on such stirring addresses as "June Terror Update" and "The Pope Is Dead" made them the ideal choice to meet the challenge of chronicling the visionary mark left on history by its shining light, President George W. Bush.

Free from all the filters, handlers, and facts . . .

I tell the untold story of my inspirational life. You will struggle with me in my strugglesome youth. During the Vietnam War, you will be right there at my side as I face down the terrible enemy of my sinful partying. Together, we will meet and fall head over heels for the love of my life -- Jesus. And through me you will become a beloved, terror-fighting hero in the greatest hour of my presidency, September 11, 2001.

I embarked upon this important and historical work against the advice of my advisors. Come what may, I wanted you to hear my story from me, in my own talking.