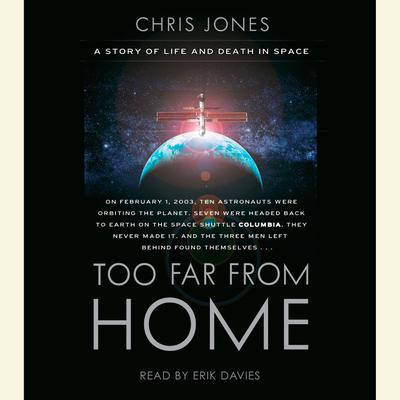 Too Far From Home - Abridged

A Story of Life and Death in Space

An incredible, true-life adventure set on the most dangerous frontier of all—outer spaceIn the nearly forty years since Neil Armstrong walked on the moon, space travel has come to be seen as a routine enterprise—at least until the shuttle Columbia disintegrated like the Challenger before it, reminding us, once again, that the dangers are all too real.
Too Far from Home vividly captures the hazardous realities of space travel. Every time an astronaut makes the trip into space, he faces the possibility of death from the slightest mechanical error or instance of bad luck: a cracked O-ring, an errant piece of space junk, an oxygen leak . . . There are a myriad of frighteningly probable events that would result in an astronaut’s death. In fact, twenty-one people who have attempted the journey have been killed.
Yet for a special breed of individual, the call of space is worth the risk. Men such as U.S. astronauts Donald Pettit and Kenneth Bowersox, and Russian flight engineer Nikolai Budarin, who in November 2002 left on what was to be a routine fourteen-week mission maintaining the International Space Station.
But then, on February 23, 2003, the Columbia exploded beneath them. Despite the numerous news reports examining the tragedy, the public remained largely unaware that three men remained orbiting the earth. With the launch program suspended indefinitely, these astronauts had suddenly lost their ride home.
Too Far from Home chronicles the efforts of the beleaguered Mission Controls in Houston and Moscow as they work frantically against the clock to bring their men safely back to Earth, ultimately settling on a plan that felt, at best, like a long shot.
Latched to the side of the space station was a Russian-built Soyuz TMA-1 capsule, whose technology dated from the late 1960s (in 1971 a malfunction in the Soyuz 11 capsule left three Russian astronauts dead.) Despite the inherent danger, the Soyuz became the only hope to return Bowersox, Budarin, and Pettit home.
Chris Jones writes beautifully of the majesty and mystique of space travel, while reminding us all how perilous it is to soar beyond the sky.